As two 20-somethings, who have started and are running a business, there a few questions we get asked a lot by customers. Some are questions like “How do you come up with all of the different ideas/puzzles?!”, or “What made you want to set up an escape room?”. Some are a little more personal, “Is it profitable?”, “Do you make a living?”, and some are a reflection of our, still very much, baby-faced looks “Is this part of a college project” or “Is this your weekend job for University?” (These ones are the most fun to answer).

However, the one question we get asked the most, which is possibly the most difficult to answer concisely, is “How did you start up?” So, here is a quick look at the methods we used to start TimeTrap, as two 21 year-olds, straight out of University, on a limited budget.

Running pop-ups and growing organically were probably the most important steps we took when starting-up that allowed us to make TimeTrap a success, as well as finding the right people that were willing to take a chance on us, and a lot of hard work.

It was April 2016 when Katie and I had the first conversation about what was soon to become TimeTrap. I was about to sit my final year University exams and Katie had recently been made redundant after working in interior design for six months since graduating with an English Language degree. At the time it seemed more like one of those “Imagine if we did this…” chats, rather than something we were seriously considering. I was at the stage where I didn’t know what I wanted to do upon graduating, but I knew I didn’t want to go into a graduate role at a big corporation, as seemed the norm for most business graduates. Katie was looking to make the next move in her career and had started to try her hand at consulting on design for existing escape rooms. One conversation led to another and we finally decided to take the plunge and start our business at the age of 21, with £1,000 of savings each.

You can’t have a real-life gaming experience without having a real life space and so our first hurdle was to find a venue in a town where rent prices are some of the highest outside of London. A little nugget of advice we had been given whilst on a business workshop run by Pop-Up Business School was to find and use other people’s space (with their permission, of course). One of the biggest vacant spaces in Reading in 2016 (and even still now) was Reading Prison, a disused Victorian gaol that had, at the time, just been used for a pop-up art exhibition and was being considered as an arts venue. We got in touch with the organisation looking after Reading Gaol and, although it turned out that the Gaol was not going to be a viable option, we were instead offered an opportunity to use a venue as part of the Reading Fringe Festival, so we took it.

The space we were given for the Fringe was the dungeon-themed basement of the Purple Turtle so, obviously, we chose to design a dungeon themed game to make best use of this. Unfortunately, we were only able to use the space during two weekday daytimes of the Festival and as a result made a loss overall. However, the experience and publicity from running our first ever game gave us the confidence to kick on and start planning our next experience.

Following our Fringe stint, we trawled Reading on a hot day in August 2016 asking every business and venue in town if they had any unused space and whether they would be interested in us using it for mutual benefit. After a long day of many rejections we started to head back home, but had one more venue in mind to try. This would end up being the place that took a chance on us and where we held our second pop-up game, Great Expectations.

Being a Dickensian themed bar, the decor and storyline of the game was obvious, so we set about designing and building Dickens’ Last Chapter, based on Charles’ final book that was unfinished. This project again came with its own challenges… On the opening day we had a visitor from the BBC coming to do a short piece on us as part of a segment about the Pop-Up Business School, however, this was also the day (of all days) that our hire van broke down with all of our props, puzzles and set on board – not ideal. Thankfully, we got around this problem and appeared on BBC South Today the next evening. This bit of bad luck was the worst thing to happen during our time at Great Expectations and the rest of six week run went well, with over 65 teams visiting us, including many customers that have played all of our games since! 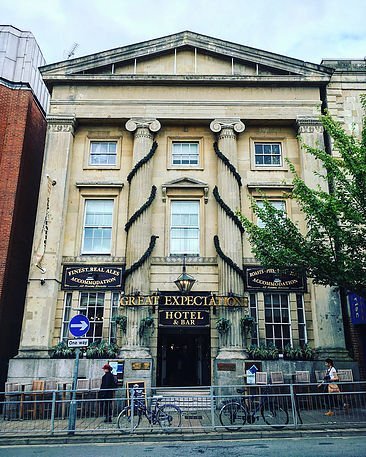 Our final pop-up break came when our Great Expectations game was spotted by someone from a Fortune 100 company, based in Reading. They were having some team training days in nearby hotels and wanted to know if we could bring the entire game to them. We booked them in for an event which went well and we booked them in for another. The hotel asked if they could include us on their conference add-on brochure and we had another booking through that. By this point we had raised enough money to, and had the confidence to go ahead with, renting a permanent building. And so finally, we ceased lugging around our not-designed-to-be-mobile game and started working on our first permanent game for 11, Friar Street, Rebellion. 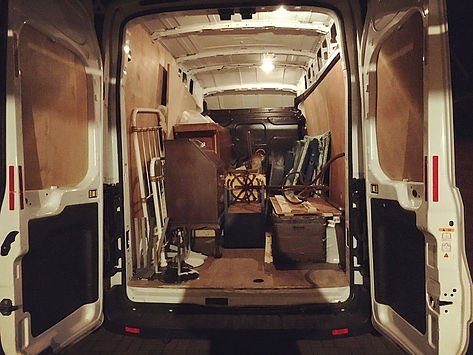 By this time it was January 2017, six months after starting the business, and we were waiting for our lease to be agreed. We continued working on our first game and were finally able to move into the building in March 2017 to renovate and build the game – we opened three months later. We chose to grow to this point in this way because we didn’t want any kind of outside funding but rather to start small and work up to the point when we could afford to rent a permanent building. And we also wanted to test the concept of the business and whether we could do it successfully before committing to anything huge.

When working on a limited budget, this is something you don’t have much choice about. However, you can either dwell on your lack of resources or embrace it – we chose the latter.

Save the planet and your pennies

A lot of what you see at TimeTrap has been sourced either cheaply or for free. That’s not to say that it looks cheap, in fact a lot of people comment on how professional everything looks. We up-cycled materials in a way that meant we could spend money in other areas. Soon after moving in to 11, Friar Street, we took collection of around 80 pallets which were completely free, including delivery, thanks to Chiltern Wood Recycling. After the fun of taking all of these pallets up three storeys, we slowly but surely used them to build all kinds of weird and wonderful things. Here are some examples of how those 80 pallets were used:

One of our other favourite bits of up-cycled furniture is this table in our briefing area. Whilst at the tip, we noticed someone about to throw this suitcase away, and quickly asked them if we could take it instead. The slightly bemused person kindly agreed and, four hairpin legs later, it looked like this: 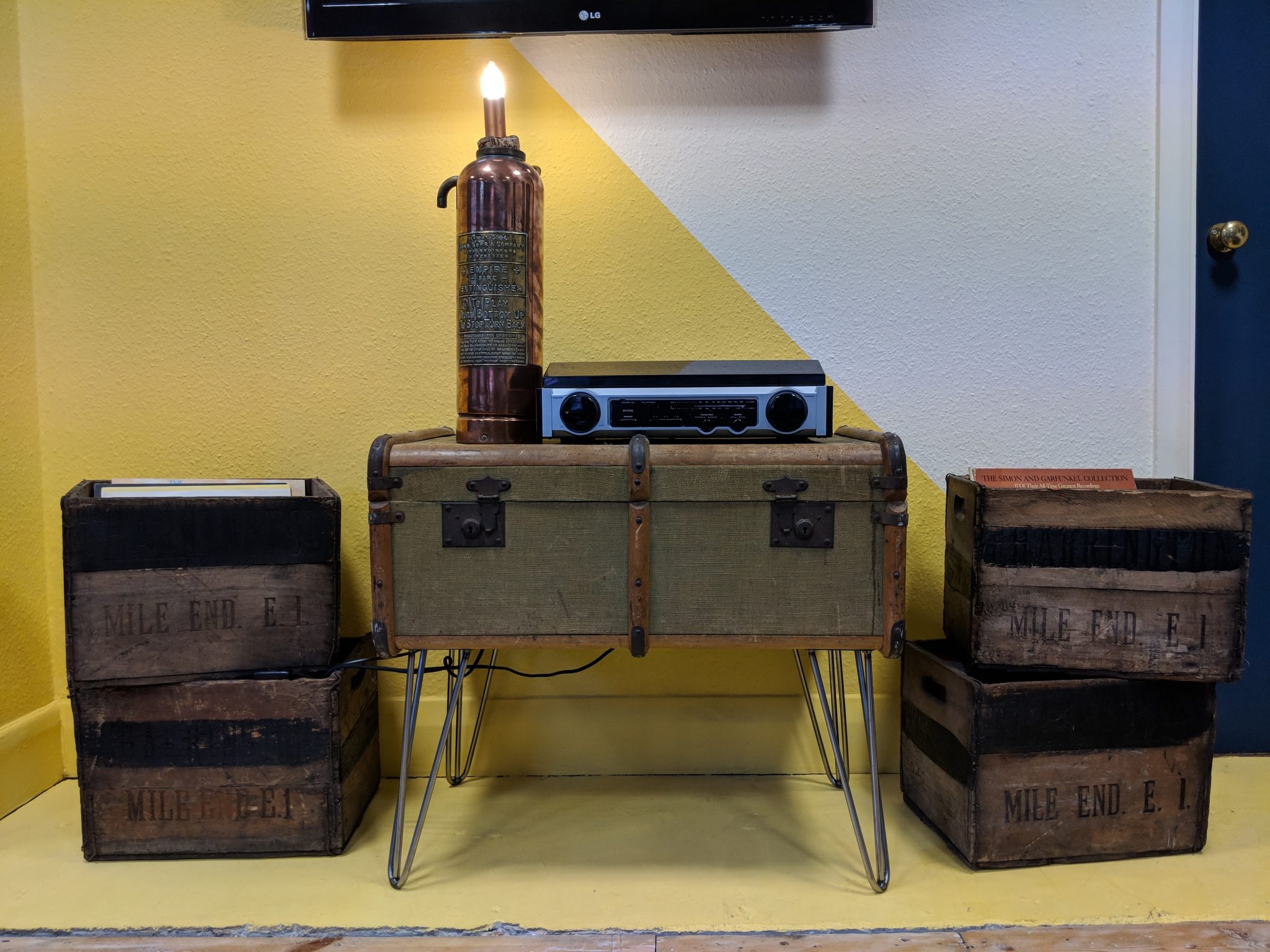 Call on Family and Friends

We wouldn’t have been able to get where we are today without the support of family and friends and, in particular, our parents. They don’t need to be the next Monet or Kelly Hoppen, but whether it was cleaning, painting or crafting, we had people come from all over to help, which we are extremely grateful for. We found pizza to be the best form of showing our appreciation. 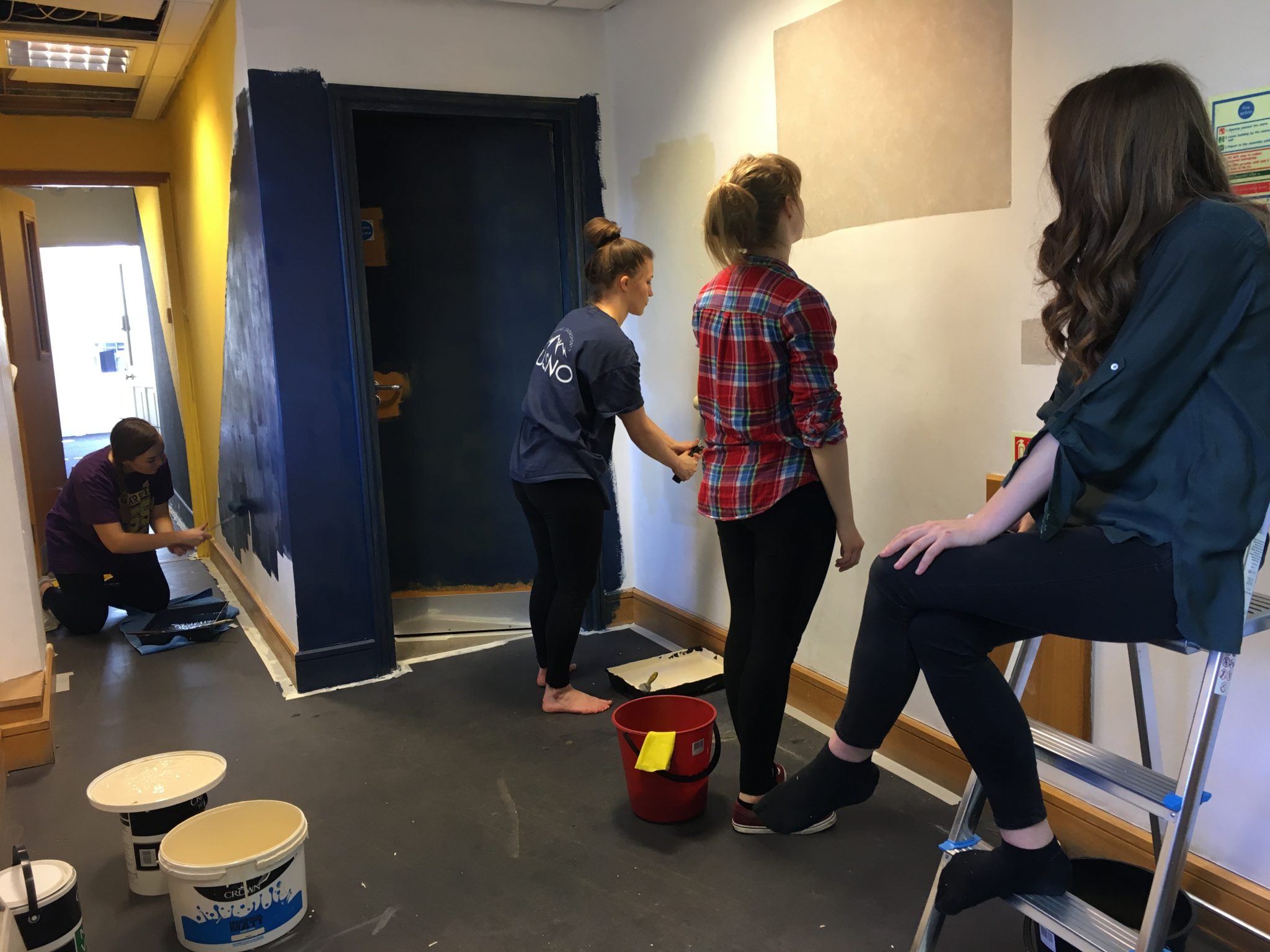 There are a lot of skilled people out there who would have been able to do a lot of the things we did twice as fast and to a higher spec. However, we did 90% of the work of fitting out our venue and games ourselves, meaning we saved thousands of pounds. Although time is money, we only had one of the two, meaning we had to teach ourselves basic woodwork, plumbing etc. We completely renovated an old building site office into our time travelling facility by pulling up carpets, sanding floors and running wires. When constructing our first permanent game, Rebellion, we even had to learn how to mix and apply lime to walls, as they would have done in 1136, to give it the authentic Medieval feel we wanted.

Yeah okay, this one is pretty obvious. Starting your own business isn’t easy. You put in twice as many hours as you may do in a ‘normal’ job, have to miss out on social events with friends/family and it may put a strain on relationships. However, although a cliché, it is honestly all worth it when you see people enjoying something that you have created. We’ve had groups of friends visit as part of annual reunions, have held hundreds of birthday celebrations and even had the honour of people ‘saying yes’ in our rooms. As escape rooms, we cultivate laughter, bring families together and give people experiences they will talk about for weeks to come. This is what makes all of the blood, sweat and tears worth it.

I always said that I would measure our true success when we were able to employ our first member of staff. This came in October 2017, just before opening our second permanent experience, Imaginarium. Fast forward to March 2019 and we now have a team of 12, including ourselves. 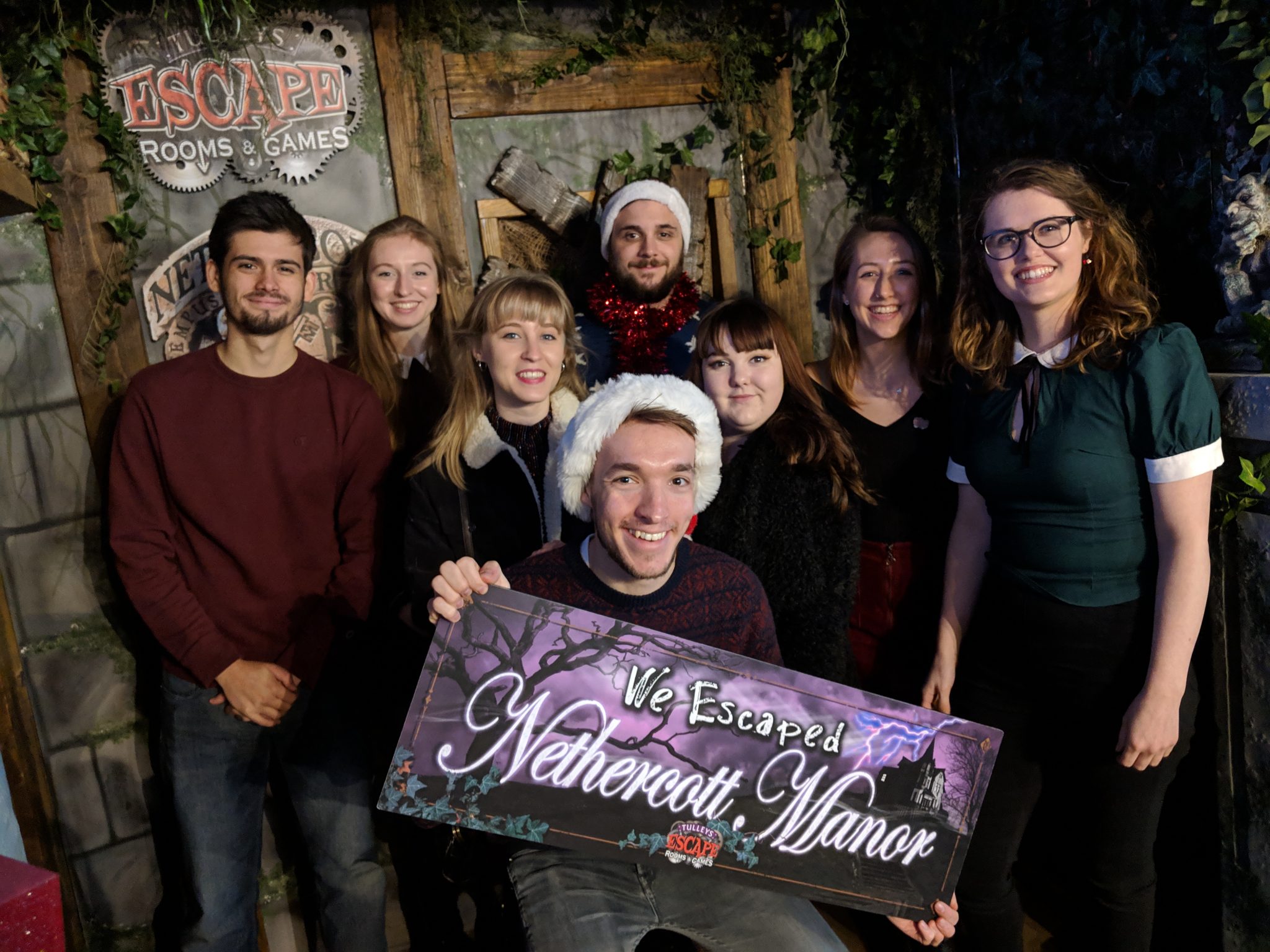 Handing over your baby to someone else and letting them have control over how people perceive your brand is hard but necessary in order to grow. We’re lucky enough to have ten employees who are invested in TimeTrap and care about each individual customer that comes through our door. Myself and Katie have gone from the early stages of opening with just one game and running every single game ourselves, to handing over the running of games to others and taking on a more venue management based role, to now being able to be absent from the venue on certain days and focus on growing TimeTrap. Without being able to put trust in the people we have trained we wouldn’t be able to develop new and exciting games.

So, that is a general overview of how we, two people who didn’t want a normal job, started something that we love doing, and still do. Through starting small, growing organically, using what we had, and a lot of hard work, we created something that hundreds of people a week come and enjoy. Not only do we now have a business we are proud of, but we have employees we are proud of, who we can trust to give our time travellers the best possible experience escaping to new times and places. Two years ago today we signed the lease on our Friar Street building in Reading. What’s next? You’ll have to wait and see…

Fancy a trip back in time? Take a look at our experiences and book online here.

The Fringe and Beyond