How to Create an Escape Room and Immerse Players

In her first blog post, Katie takes a look at how to create an escape room, and importantly, how you can immerse your players in every aspect of the experience.

Good escape rooms are all about creative puzzles with a strong flow, tied together by an interesting back story. But great escape rooms take this shell and line it with immersion to deliver to its players, not only an experience, but an adventure. This blog takes a look at some of the ways this can be achieved.

Small Details Are The Most Important

Although it’s the decoration and furniture that will give the first impression of a room, it’s the small details that can shatter the illusion. Players are unlikely to marvel at every great prop or piece of scenery that is in keeping with the world in which they have been immersed, but will notice immediately if anything is out of place or contradictory.

Taking time to research the setting of a game is invaluable. It can help in sourcing or developing the most authentic props and in avoiding including out-of-place items. In historical games this is especially important – a few minutes research will reveal that, in fact, the telegram was not yet invented or Helium hadn’t been discovered.

Being meticulous and diligent is also important. Players are going to search everything and everywhere from top to bottom, so it is crucial to do the same to locate anything that violates the immersion. Out-of-place marks, stamps or labels, modern dates or references in text, and present-day production methods, from laminated paper to laminated flooring, should all be removed.

Target All The Senses

It’s not only about what players will see during the experience. We use all of our senses to build a picture of our environment, so the most immersive experience should appeal, not just to sight, but to hearing, smell, taste and touch as well.

Admittedly taste is a little difficult, but as taste and smell are interconnected, you can kill two birds with one stone with a fitting fragrance in the form of (concealed) diffuser sticks, room spray or a timed fragrance system. Who knew they had a use for something other than public toilets. Again, researching the chosen environment will deliver ideas for the smells most effective in describing the setting.

Some escape games do already include a soundtrack, sometimes in the form of generic speed-inducing music, sometimes setting-appropriate and well thought-out background sound. A soundtrack does not need to be music, after all, an immersive experience should mimic the real life context, and how often in life is music constantly playing? A selection of appropriate effects, and music if it makes sense to the environment, in a well edited escape room soundscape adds another subtle but very effective layer of immersion to any game.

And finally touch – this links back to prop and scenery sourcing. Choosing props made of authentic materials and reducing modern features, if necessary, ensures that everything players touch and manipulate enriches their experience of the setting. Not just including correct materials in the realisation of the game design, but actively adding as many different textures as the game can reasonably contain allows players to be even deeper immersed as they explore the scenario through everything they touch.

When people set out to create an escape room, they will often think of the physical space – this however misses out one of, if not the most important aspect of the experience – the games master. It’s fairly well known that the games master plays a huge part in immersing the players in the story of their game and many do adopt a relevant character during their briefing. This is a great way to further introduce players to their environment but it can be developed even further with some imagination.

Thinking carefully about the way clues are delivered inside the room and ensuring this fits as seamlessly as possible with the game reduces the disparity between this and the theme. Rather than a modern monitor out on the wall, clues can be delivered via a prop that makes sense to the context. In the mad scientist’s laboratory maybe they appear on his discarded laptop, in the haunted hotel room – on the dusty television in the cabinet. In rooms with themes that cannot logically contain standard screens a little poetic license may be necessary. Disguising screens in photo frames, as blackboards or in windows is a significant step closer to immersion than slapping a screen on the wall where it is overtly out of place.

Of course some operators choose to communicate with their players via a walkie talkie style set-up. This is a great work-around for an out of place screen, but only if the walkie talkies themselves make sense in the theme. The language the Games Master uses when speaking to players should also be given some thought. If the Games Master is playing the role of a medieval dungeon guard, they should talk or write like a medieval dungeon guard (within the boundaries of understandability). No modern ‘don’ts’ or ‘can’ts’, ‘thou shalt’ instead of ‘you will’ and vocab changes such as ‘casket’ over ‘box’ and ‘pendant’ over ‘necklace’ will make a huge difference to the players’ submersion in the environment.

Some thought should also be given to the actual content of clues given. Telling players ‘look under the rug’ interrupts the flow of their game and makes them aware that there is a concrete person who has created this game in false circumstances. Giving clues in a less pronounced way, such as in riddle form, allows them to integrate into the game more effectively, as though they are just another puzzle that has become clear to solve.

Start Outside The Game Room

A player’s experience starts the moment they enter the building, not the game room. Non-game areas that have the appearance of an office or waiting room will not get the imaginative juices flowing. Investing in developing these spaces into a relevant pre-game experience will make for players that forget where they really are from the moment they arrive. A company with a brand and games that have a coherent theme running through them lends itself to more easily designed and more immersive common spaces – immersion has to make sense to be successful.

Easy places to improve include; covering, frosting or removing windows with a view to the outside world, painting areas in a non-standard fashion such as one colour for floor, walls and ceiling or geometric colour blocks and hiding evidence of everyday life such as pipes, cables and other operational equipment (this applies crucially to the inside of the games rooms too). Everything previously mentioned about appealing to all senses can be implemented in non-game areas too. 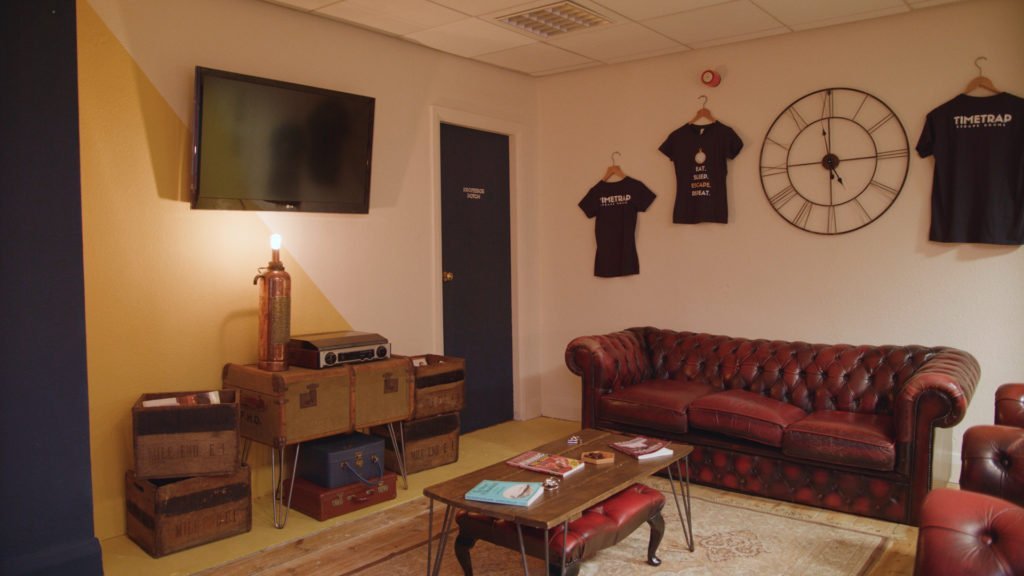 It isn’t for everyone, but for some players, the opportunity to dress up in character will top off their experience. Others will find it silly and even embarrassing, and would consider their experience ruined if made to dress up. Offering the option in an open and completely non-obligatory way will enable both types of players to enjoy their experience.

We hope you found this blog interesting – if you did, you may also like our behind the scenes look at how we built Rebellion, our first ever permanent experience.

Looking to design and build your own escape room? Get in touch with us if you would like to chat about our escape room design or consultancy options. To stay up to date with all of our latest blogs, simply like our Facebook page or follow us on Twitter!