BEHIND THE SCENES
OF REBELLION – 1136

You’ve experienced Rebellion, now take a look at why we chose this time period, how the design process works, and the build out.

Embarking on designing a new game is one of the most exciting stages of running TimeTrap. It starts with deciding the theme of the room and, therefore, the background story of the game, and as we’re a time travelling facility, this means choosing our next time period!

As we started off doing pop-up games, we were guided into choosing our time periods by the spaces we were offered. Our first pop-up game was in the basement of the bar, The Purple Turtle, and if you’re familiar with the decor of that particular establishment, you’ll know that we had to choose a Medieval dungeon theme for that game. Having bought all the props and designed the puzzles around that theme, it seemed silly not to reestablish the game when we moved to our permanent home. However, in the nearly 11 months between the closure of that first pop-up game and the opening of the new game at our permanent home, we grew as a company, and felt that the first game was no longer of a good enough standard and needed adapting. 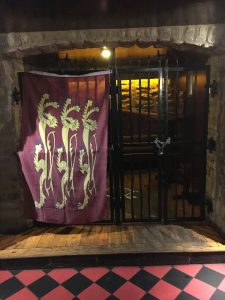 We wanted to make the storyline something more serious and meaningful while still being able to use our Medieval props. We had also introduced our character, Professor Potch, the creator of our time warps – so we couldn’t keep the theme of the first game, which was mythical, revolving around a sorcerer, as that didn’t fit in with the serious business of time travel! So we set about brainstorming a new storyline. Andrew was aware of the fact that King Henry I is believed to be buried in Reading Abbey and, at the time, the Reading Abbey restoration project was taking place, ready for a grand re-opening in 2017. We concluded that we’d like to do a game revolving around something that is a part of local history and so we set about researching the era. 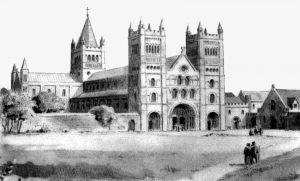 Our research led us to 1136, the year after the death of Henry I, when his daughter, the Empress Matilda, whom he had named as his heir, was entering into conflict with her cousin, Stephen of Blois, who was trying to take the crown for his own. We felt this was a nice nod to Reading as well as lending itself to an interesting back story for an escape room. We introduced our future players into the scenario as rebels fighting on the side of Matilda on a mission to infiltrate Stephen’s castle and steal the crown back for its rightful owner. Escape rooms are lacking in female characters as protagonists to their storylines and we wanted ours to include a strong female figure. The period we take you back to in Rebellion, known as the Anarchy, is incidentally also the basis for the series ‘Game of Thrones’, hence our little nods to Game of Thrones characters in our game.

The Design Process of Rebellion

After we’d established this storyline, we went back to the design of our pop-up game and looked at how much of it we could adapt into the new game. The result was just two puzzles. This is because we don’t force puzzle into storylines, we let the story dictate the puzzles – its actually an easier way to find inspiration. Imagining the setting, the items and objects that would be found there, and the events that would happen to the scene and characters in it, allows you something to base your first thoughts on. Instead of working on a blank canvas that requires you to invent ideas for puzzles from the infinite depths of your mind, it gives you an initial stimulation that helps focus your designing and ensures the resulting puzzle fits the theme.

The castle scene was, admittedly, more difficult, as castles were actually rather bare due to the fact that even rich people didn’t have much stuff in 1136. But researching through objects and situations that did crop up in those days led us to compile a cohort of puzzles, only two of which transferred from Medieval Game #1. These were: the code hidden in the mid-way-through game of Othello and the table featuring compass directions to solve the sums, as both Othello and the use of compasses were present in our year of 1136 and would have had a place within a castle at that time. The additional puzzles from that game were either not good enough or just didn’t fit anywhere in the new storyline.

Other puzzles are based around a variety of inspirational directions. The prominence of battles at the time, particularly the amount fought between Stephen and Matilda, created a puzzle based around Stephen and his head commander compiling a battle plan to ensure they would beat Matilda’s oncoming army. The weapons used are authentic weapons from the period. Another puzzle uses the popularity of the drink ‘mead’ to form a cross-referencing/sorting puzzle based around stereotypes from the period, such as ‘distressed damsels’ and ‘black knights’. As well as maintaining historical accuracy where possible, we also felt it was important to create a Medieval setting that was true to what people think the Medieval period was like, rather than risk reducing the immersion and enjoyment by forcing a completely true version of history. Sometimes its necessary to take poetic license to maintain the fun and tongue-in-cheek nature that is at the heart of all escape rooms. Another example of this is the sign inside the hidden floorboard compartment telling players to ‘Replace Ye Olde Floorboard’. This was necessary to avoid broken ankles, but by instructing in the stereotypical ‘Olde English’ we all recognise, we bring a chuckle to teams (we hope) rather than breaking immersion with a sign that is clearly written by us, reminding players that they aren’t actually on a time travelling mission.

However there are many things about the game that are fully-researched truths – even the names of the allies on the map are based on real people found through meticulous research which was probably really not necessary! In fact this can cause more trouble than if they had been made-up, as historical aristocrats tended to have a title which gave them the name of a particular area, but then live in lands in a totally different part of the country. This leads to, for example, Guy, Earl of Devon actually living in lands in Norfolk. True to history but misleading players into trying to place Guy into a residence in Devon on the map. A modern example of this would be many members of the royal family – Charles, Prince of Wales, doesn’t live in Wales, neither do William and Kate, Duke and Duchess of Cambridge, live in Cambridge…

We also try to maintain immersion with the aesthetics of our environment and props, opting for chunky, real-feeling objects. Our crown is a solid, weighty metal creation, not a bendable tin replica. Our sword, while not metal for safety, is a wooden, artistically manipulated construct, which resembles an original more convincingly than a hollow, plastic toy. Even our mead bottles, as they could not be glass, are turned in wood – something that was very difficult to find and resulted in us commissioning them from a carpenter in America, along with the handmade daggers. For anything that needs to be written down, we use rice paper made the authentic way or (faux) suede cloth, and our signs are painted onto wood – no laminated notes or marker pens! We even take care to choose fonts that are in keeping with the Medieval aesthetic.

As mentioned, we reused a lot of the props from our pop-up game but also had to source a number of others to facilitate the new flow of puzzles that had been designed. This included things as large as constructing a built-in fireplace pulley system and hunting down a large throne that travelled from Newcastle by courier, to finding an affordable whole suit of armour and a period-looking game of Othello. 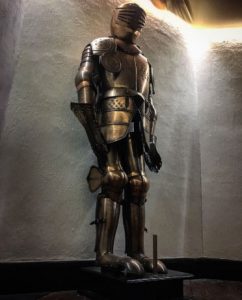 The white walls you saw in Rebellion were made using a material they would have actually had access to in Medieval times, lime powder. We used this to mask the not-so-lovely woodchip wallpaper. It took quite a few layers and a few solid days of work to achieve the look we wanted.

Our stone walls in Rebellion were individually hand crafted using that other popular Medieval building material, Polyfilla. We could have saved ourselves a lot of time by doing what most would have done and used stone effect wallpaper but this wouldn’t have give the same texture or shadowing as this method. 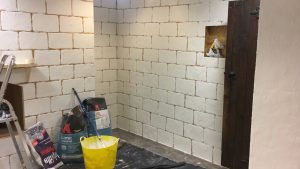 A table we purchased for £26 came to be deconstructed and used as several different props around the two rooms. 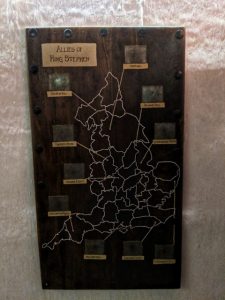 2. We used the legs of the table as our candleholders in the first room 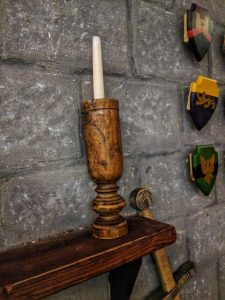 3. We took the metal fixings and the sides of the table and made them into three shelves. 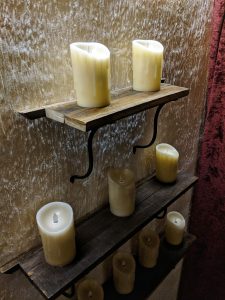 Not one bit of that table was chucked away!

The scales in the first room are a genuine metal detecting find, found in France and believed to be Roman. They work a dream though, and way better than anything modern we found. They don’t make them like they used to, ey?! 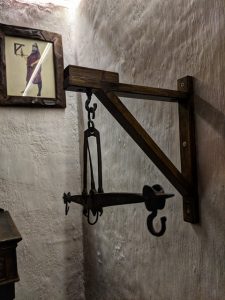 And that is how Rebellion was created, from conception, design stage, all the way through to how we build the set and props within it. We hope you enjoyed reading all about it!

ENJOYED YOUR EXPERIENCE? EVERY REVIEW WE RECEIVE MEANS SO MUCH TO US – PLEASE TAKE THE TIME TO LEAVE ONE. 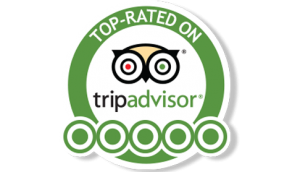